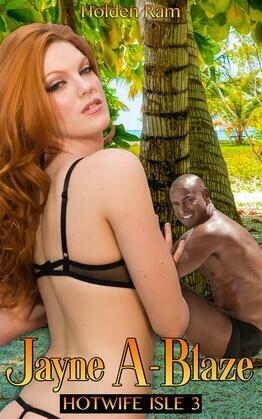 Derek and his hotwife Jayne return to the resort known for having many well-endowed men and the women who desire them. Beautiful Jayne is shocked to learn that her mother Barb -- always a very religious and sexually repressed person -- wants to go, too! While Derek enjoys watching Jayne take every man she chooses, Barb adjusts to her new experience. The question is, how far will Barb go?

“I remember hearing about swingers who trade partners. I never approved, but I understand a trade. Why would any man tolerate this hotwife thing?”

“Maybe I don’t entirely get it, either, but if we’re both happy, who cares?”

I stuck one foot out from under the table. “Take a look at my ankle bracelet.”

“What?” That was an even bigger shock than seeing her with the video. I thought she just wanted to ask me what the resort was like and leave it at that. “You, uh, are you sure? Do you understand what it’s really like?”

“It says clothing optional. So I don’t have to be nude.”

“That’s true, Mom, but have you looked at everything on the website?”

She gave me an impish smile, almost like a naughty child. It was a look I had never seen from her before. “Like I said, I’m aware of getting old. I suppose I’ll just, you know, see the sights and enjoy the Caribbean climate. Sure I’ll feel awkward when we get there. But I’m realistic. No man is going to take a second look at me with all those beautiful young women around, so I’ll just enjoy the atmosphere and maybe talk to some interesting people. And you must know I couldn’t bring myself to go alone. But if I go with you and Derek, I think I can do this.”

“Okay, if you’re sure,” I said, as a sudden realization came to me: She had been alone for some years now and obviously had decided that she did not just want to watch TV and go online until she withered up and died.

Doing something a little crazy was exactly what she needed.