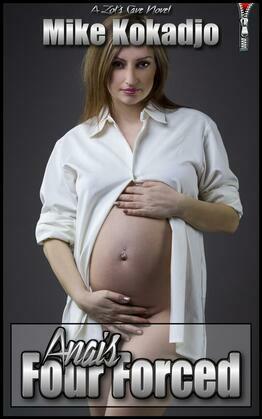 DESCRIPTION:
Devoted, debased Anaïs continues her adventures in the log home of her owner. Kept for years as his sex toy alongside other owned properties, she yields to his every whim. She recently endured a procedure to make her permanently pregnant, an abominable act thrust upon her by a captured nurse. The nurse has returned and offered an additional bit of deviance to her owner. Anaïs will be transformed into a four-hole slut, for her owner's pleasure.

EXCERPT:
“May I serve you, sir?” Anaïs asked, looking up past her owner as she presented herself, her enormous and flawlessly round belly nestled between her thighs. The four cables her owner had run through her, the ones that looped and formed convenient handles, chafed at her thighs. She ignored the discomfort. Her owner needed her. Her owner demanded her services.

“Of course, sir. Thank you, sir.” Anaïs leaned back and then tipped her head forward, her hands still turned palms up on her thighs. Unless he ordered her otherwise, she was always to do this hands-free.

Her owner grunted and leaned over, to run his hands over her magnificent, permanently pregnant belly. He didn’t mind. He wanted to feel her, to feel her bulging belly.

He enjoyed feeling her pliable yet firm flesh, soft yet immovable. From the time the surgical balloons had been placed inside her, Anaïs was forever a woman overdue, struggling to carry into her tenth month.

Anaïs leaned back now, offering her belly for his pleasure. She straightened her arms behind her and thrust upward, the full ripeness of her belly jutting upward into his eager hands. The other properties, standing mute in their doorways, breathed harder as they watched. Precisely because she was the lowliest of them, Anaïs was in many ways also the most alluring.

Anaïs felt no shame, not at servicing her owner, not at being taken here in the hallway next to the sleeping form of another of her owner’s properties.

Not at being elevated to an exalted position as the favored fuck buddy of the owner’s wife only to be thrown back to the bottom of the ranks, out of favor once more.

And Anaïs felt no shame in having her body altered with the cosmetic surgical balloons inside her belly: seven painfully large balloons that stretched her skin and made her appear ready to pop with the merest pressure.

All that Anaïs was — her shape, her hair color, her ready compliance to every deviant desire — was what her owner wanted. So if he wanted her as she lay on the wood floor of the hallway, displayed before the other chained properties, she would give herself over to him. Always.