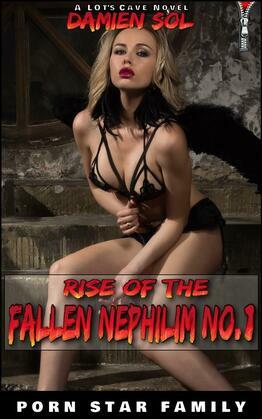 Rise Of The Fallen Nephilim No.1

DESCRIPTION:
Bridgett was just an average gothic chick with a tad sadistic side to her. Yet even that wasn't enough to prepare her for what she truly was. For some time she's been thinking she was going insane given what she had been seeing that no one else seemed to be able to, or they were hiding it from her. Still what happened one night would forever change her fate as Bridgett chose to fall for the woman she loves.


EXCERPT:
“Okay, Anael, you just hold onto me and just enjoy what’s about to happen, alright?” Vikki spoke in a teacherly voice as Anael laid on top of her once she and Vikki had changed positions on the chaise.

“It’s okay, relax, you won’t enjoy it if you’re so tense,” Vikki said affectionately, rubbing Anael’s back. A smile graced her lips at Anael’s whimper. “Starting to feel good isn’t it?” she asked, gently thrusting her hips up, so Anael could get used to it.

“It’s not like father’s,” Anael said, a little disappointed.

“No dildo will ever compare to what your father, but it’s not the tool that makes the sex as wonderful as it is. It’s who is in it with you,” Vikki said softly, brushing a strand of her snow-white hair behind her ear. Watching Bridgett reaching down and grabbing the bottle of lube. “This might feel weird for a bit, but I promise you’ll like it. I do, especially when your father used it on me ,” Vikki said. “See, that didn’t hurt did it?” she asked, lightly kissing Anael’s lips when she shook her head. “Now this is going to get… well, you’ll see. Just remember to relax and enjoy it.”

“I promise, from now on if you need sex and if Ira is busy you come find us, and we’ll take care of you,” Bridgett said, into Anael’s ear.