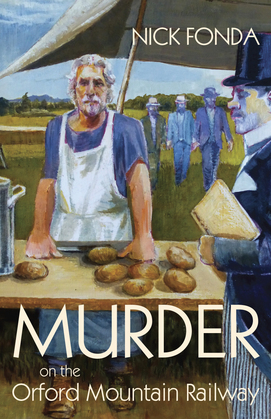 Murder on the Orford Mountain Railway

A 12-year old boy, son of an Italian camp cook, is shot in the back and killed near the Orford Mountain Railway construction site in rural Quebec in August 1905. The crime is all the more staggering for being the second child murder on a railway in three days. A wave of shock and terror spreads throughout the area.The police make arrests, but it becomes clear that the two suspects are not the murderers.Fast forward a century. The archivist of a local historical society comes across the diary of a teenage girl who chronicled the weeks she spent with relatives nearby in August 1905. More by accident than design, she provides clues that help the narrator investigate and solve the century-old cold case of the murder on the Orford Mountain Railway.In this historical true crime novel, Nick Fonda takes his mastery of local lore and story-telling skills to a new level.Nick Fonda is an award-winning journalist who has been documenting life in the Quebec’s Eastern Townships for years. He is the author of three books of nonfiction as well as a collection of short stories. His most recent book is Richmond, Now and Then. He lives in Richmond, Quebec.His previous books include Hanging Fred and a Few Others, Principals and Other Schoolyard Bullies, and Roads to Richmond.Reviews“midway between a piece of historical fiction and an account of true crime… it is an engaging step back in time, one that will leave readers enlightened and engaged about our forebears and the world they lived in.” Jim Napier, Ottawa Review of BooksAbout Nick Fonda’s fiction“Nick Fonda has a great sense of compassion. (…) We are made better, as individuals, for listening to Nick Fonda’s voices.” Alistair MacLeod on Principals and Other Schoolyard Bullies“Fonda’s characters are well-drawn, coming to life on the page with intelligence and imagination.” —Zoe Whittall