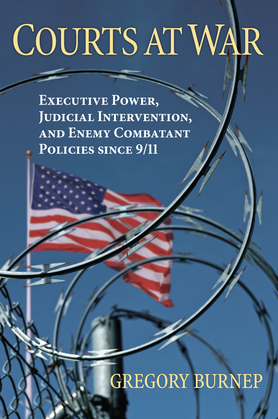 On June 28, 2004, the US Supreme Court broke with a long-standing tradition of deference to the executive in wartime national security cases and became an important actor in an armed conflict. By declining to rubber-stamp the executive branch’s actions, the judiciary would henceforth play a major role in shaping national security policies in the war on terror. After the September 11, 2001, terrorist attacks, lawyers, lawsuits, and court decisions have repeatedly altered the landscape in the policy areas of detention and military commissions. In Courts at War Gregory Burnep explores how, after 9/11, lawyers and judges became deeply involved in an armed conflict, with important consequences for presidential authority, the separation of powers, and the treatment of individuals suspected of posing a threat to the United States.

Courts at War goes beyond the postâ€"9/11 armed conflict. It analyzes the changes in the position of courts vis-à-vis the other branches of government (courts in conflict with the executive, the legislature, or both)—even courts in conflict with other courts. The consequences included increased checks on presidential authority and greater levels of due process for suspected belligerents held in US custody. But Burnep also shows that there are unintended consequences that accompany these developments.