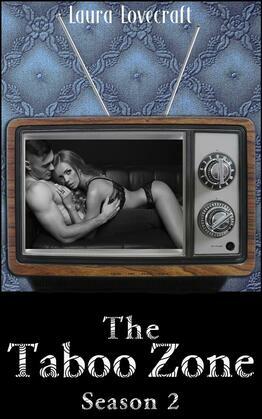 Renewed for a second season, The Taboo Zone! Hostess Laura Lovecraft is back as we leave our reality to step into the Taboo Zone where societies rules give way to unbridled incestuous lust!

For Your Own Good - Tommy loses his virginity without leaving the house.

That One Thing - Walt's wife isn't the only one who can give it to him.

“Let me ask you a question, Tommy. What do you think of your sister?”

“She’s a brat and should be wearing a free lunch sign.”

“Hey!” Becca exclaimed. “I’m not free, they at least have to buy me weed.”

“How does she look?”

“If she weren’t your sister, what would you think of her? She hot?”

Tommy shrugged. “That’s kind of a messed up question.”

“Answer it, or I’ll call your grandmother and tell her the two of you are going to spend all weekend with her.” Mom tapped her phone for emphasis.

“You better answer!” Becca told him. “Just say something, I don’t care what you think.”

Tommy released a resigned sigh and looked at his older sister. Becca was pretty much his mother’s mini me. Same long auburn hair, although in her case she’d added a few black streaks and the tips were done in black as well.

Becca had the same eyes, that like his mother’s, were so green they resembled cat’s eyes and some people thought were contacts. Like mom, she was fair to the point of ghostly, but unlike her mother, Becca had a smattering of freckles around her nose and another large patch of them on her chest.

There was a lot of her chest exposed as the lowcut sleeveless pink half shirt she wore was tight enough to not only show off a lot of cleavage but advertise she wasn’t wearing a bra.

Becca was as tall as Mom, but much thinner, making her breasts seem bigger, and her ass, which Tommy, as shameful as it was, had checked out more than once, was smaller, but perfectly shaped and looked firm enough to crack a walnut on.

Even if he hadn’t looked before, she was playing it up and doing a slow spin for him, shaking her ass which was on full display in her painted on cut off shorts. She finished by giving her braless boobs a shake.

“You were going to the party without a bra?”

“Less to take off later,” Becca giggled like the airhead she pretty much was, as his father used to say, good thing God made her pretty. “What do you think geek, your big sis got what it takes?”

“If there’s anything left to take,” he scowled.

“Okay? You really don’t know what a woman’s supposed to look like do you?” Becca scowled.

“He’s lying and saying what he thinks he’s supposed to.” Mom told her. “Now you,” she indicated his sister.

“Please don’t ask me what I think of this dork.”

“No, my question is you know how you’ve been wanting me to co-sign for you to get a car?”

“Yeah, I work, and I can make payments, and you keep saying no!”

“Then its yours, but only if,” Mom nodded towards Tommy. “You have sex with your brother.”