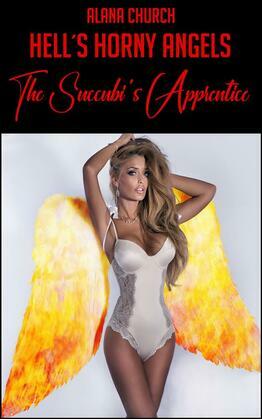 Morgan is a succubus, the first new one in centuries. But she has to learn how to protect herself. Who could possibly be a better teacher than sexy, exotic Althea, one of the oldest succubi of all? Can Morgan and her twin cousins, John and Jasmine, learn to fit into Altheas's household? And what will happen when Althea and Morgan have to take on one of the evil demon spawn?

"Miss Hardin." Josh tilted his head back, looking her in the eyes. "Are you trying to seduce me?"

Josh took her hand and raised it to his mouth. Morgan shivered as his breath played over her knuckles. "Looking the way you do, Morgan, you won't need to be very good. Men will be throwing themselves at you for the entirety of your very long life, if I am any judge."

The squirming desire in her belly was all but uncontrollable now. Her body was hot, flushed, her groin readying itself for sex. "Will Rachel be angry?"

Josh smiled. "If I know my wife and Althea, if they're not screwing now, they will be very soon. Maybe they'll invite Yasna, maybe not. But Rachel isn't going to let Althea leave without a proper farewell."

"Mind?" Josh blinked at her. His eyes were very slightly amused, as if she were a little girl who kept confusing cows and bears. "Althea was in my wife's mind, as a spirit, for weeks. They were bound closer than anything I can imagine." He shook his head. "I can't imagine something that intimate. So no. I don't mind when Rachel goes to bed with Althea. They are bound, in some ways much more tightly than Rachel and I are, even though we're married and have spent much more time together." He smiled ruefully. "I have Rachel, as long as I don't try to separate her from Althea. It seems like a fair bargain to me."

Morgan nodded through a dry throat. "Then take me. Now."

"I don't want to go into the house. John and Jasmine will see that we're going to bed. And after what happened earlier, I don't want John thinking I'm screwing you because he's, you know, not good enough."

"Ah." Josh looked around at the room, at the bare wooden floor.

"Josh." Morgan put her hands on her hips. "Are we going to get naked? Or do I have to go and find someone who isn't going to waste my time apologizing for not having a suitable canvas on which to display our love?" She smiled as Josh snorted. "Too much?" At his nod, she shrugged. "Then get out of those clothes and get on the chair. I need to get laid, and it's going to be you."

She slinked out of her shorts and kicked off her sandals. Josh, thankfully, decided to obey her instructions without any more useless banter. Her breath caught as she took in his naked form for the first time. Not tall, no. Shorter than John by a good margin, actually. But that didn't make him any less attractive. He moved with the grace of an athlete, and there was no potbelly, no sagging pecs, no limp, lusterless gray hair to make him seem as if he were on the back nine of life. His manhood hung between his legs. Not hard. Not yet. But even with her powers only beginning to come into their full flower, Morgan could sense that it would only take a touch, a hint, to bring him roaring to rigid attention.