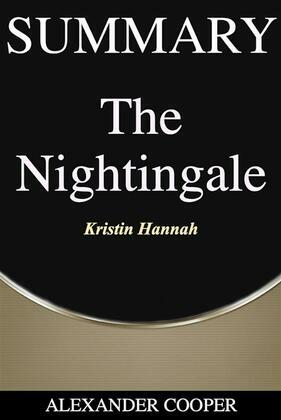 Summary of The Nightingale

Summary of The Nightingale

The Nightingale, by Kristin Hannah, is a story about two French sisters who struggle to survive during World War II. One of them is rebellious opts to fight for France while the looks for ways to survive through the war with her family. In the process both learn their real mettle and what they are really capable of.
The story begins in 1995 at the Oregon Coast where an elderly woman is dying of cancer. Her son helps her settle in a retirement home. He notices a photo of a woman named Juliette Gervaise and asks his mother who she is. The old lady begins her tale.
It is war time in France and Vianne, the older sister, lives in Carriveau, a picturesque small town. She is married to Antoine a daughter named Sophie. Isabelle, the younger sister, has been living boarding schools from childhood because her father was unwilling to raise her up and her sister was too weak to look after her. She is rebellious and soon gets expelled from several boarding schools and finally requests her father to take her in.
As the war begins, Antoine is asked to join the army while Vianne continues her work at the school as a teacher. Isabelle returns to Carriveau to live with Vianne after Nazis invade Paris. She meets a young man named Gaetan and falls in love with him. She gets interested in the resistance group that he is part of and she begins to involve in spreading propaganda against the Nazis. A Nazi named Beck billets with Vianne and treats her and Sophie kindly though Isabelle is upset with him being in the house. Vianne fears that Isabelle’s action will draw the attention of the Germans and cause them harm. Isabelle is soon asked to move to Paris on a resistance assignment.
Vianne is asked by Beck to give a list of names of Jewish people and other undesirables who work at the school. Her friend, Rachel is fired from her job. Beck helps Vianne to get in touch with Antoine through letters.
Isabelle finds a downed Allied airman in Paris and brings him to the resistance group. She is then entrusted with a plan to transport airmen across the Pyrenees Mountains into Spain where they can safely re-join their military forces. She is given a false identity of Juliette Gervaise with a code name, the Nightingale. She soon becomes a target of the Nazis. Beck helps Vianne hide Rachel who being a Jew was required to be sent to work camps. As Vianne tries to escape the town with Rachel, her daughter Sarah is shot and killed. Rachel entrust her son, Ari to Vianne. She talk him as one of her own and calls him Daniel.
Isabelle returns to Carriveau where she rescues another pilot and hides him in Vianne's farm. Beck discovers him and in the tussle that follows Isabelle and Vianne hit him in the head with a shovel and shoot him and kill him. Isabelle has gets shot and Gaetan arrives and takes Isabelle to a safe house to heal. They start their love affair.
A cruel Nazi named Von Richter billets with Vianne, who rapes Vianne and gets her pregnant. She starts taking Jewish children to a local orphanage and hiding them there for safe custody. Isabelle continues her work with the resistance and is finally captured by the Nazis but they she is the Nightingale because she is a woman. Her father claims he is the nightingale and gets shot at and killed. Isabelle is sent to work camp.


Here is a Preview of What You Will Get: