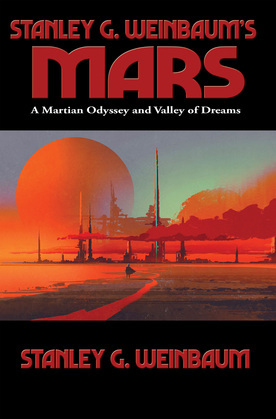 Collected in one binding are both of Stanley G. Weinbaum’s Mars stories “A Martian Odyssey” and “Valley of Dreams.” When “A Martian Odyssey” first appeared it took the science fiction world by storm. Four months later Weinbaum’s virtuosity was once again on display with the sequel “Valley of Dreams” which picks up shortly after the events of the first story. Set on a Mars that never was. Dick Jarvis, one of the members of the first space ship to reach Mars sets out on a solo expedition to photograph the countryside. His Rocket’s engine gives out 800 miles from the ship and he is forced to walk back. Accompanied by a Martian that he saved from certain death Jarvis must face one danger after another if he is to get back to his ship. “Valley of Dreams” is a hopeful story. Join Dick Jarvis and "Frenchy" Leroy as they explore an ancient Martian city and make unexpected discoveries.