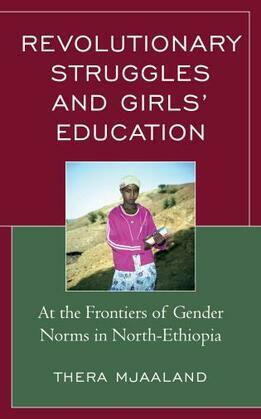 Revolutionary Struggles and Girls' Education: At the Frontiers of Gender Norms in North-Ethiopia argues that at the base of girls’ poorer performance than boys at secondary school level when puberty has set in, is the “symbolic violence” entailed in sanctioned femaleness. Informed by the modesty of Virgin Mary in Orthodox Christian veneration, it instructs girls to internalize a “holding back” which impinges on her self-efficacy and ability to be an active learner. Neoliberally-informed educational policies and plans which have co-opted liberal feminism also in Ethiopia, do not address “hard-lived” gender norms and the power and domination dynamics entailed when parity between boys and girls in school continues to be the dominant measure for equity. Despite women’s courageous contribution at a literal “frontier” during the Tigrayan liberation struggle (1975-91) where they fought on equal terms with men, and despite the tendency that girls’ outnumber boys at secondary level in the present context, sanctioned femaleness constitutes a “frontier” for girls’ educational success and transition to higher education. In fact, when teaching-learning continues to be based on memorization rather than critical thinking, the very transformative potential of education is undermined - also in a gendered sense.