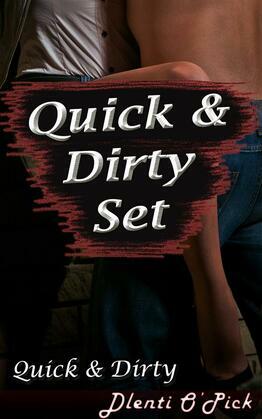 The young women in this four-book-bundle should have paid more attention to stranger danger. The steamy short stories in this bundle contains scenes with elements of humiliation, domination and submission, and sex with strangers in an alleyway, an office, behind a bar, and various places in a university.

The door closes softly behind her. Her stomach flutters with nerves and excitement.

The voice is deep. Commanding. She scrambles to comply, sinking into the chair in front of the massive desk, trying not to be drowned by the sheer size of everything. She is aware that she is petite, but everything in the office is massive compared to her. Even the boss. Especially the boss. This is supposed to be a job interview, but it's fast devolving into something else entirely- something she doesn't know if she's ready for.

Mr. Johnson puts a hand on her shoulder, his thumb grazing the skin left bare by her shirt. It's slight, but his touch is warm and she finds herself fixating on that little touch. "We need to talk for a moment."

She sinks in deeper and swallows the lump in her throat. "Wha-" she clears her throat. "What do you want to talk to me about?" she asks. Everything about her is laid out in front of him in the folder. Her childhood, all her education and work experienced, what she's worth.

"There's something that you didn't put in here," he says.

She frowns. "I don't- I don't understand what you mean," she says honestly.

"Your resume is unimpressive," he says and she flinches. She thought she's doing pretty well for someone her age. Alright, she never went to college, but she's only eighteen. She has time to rectify that if she wants, but the idea of the tuition loans just makes her shudder and she would much rather try her luck at getting a job first. If this fails, she will give up and sign herself up for a lifetime of debt.

"With all due respect, I'm- I'm pretty alright?" she loses steam at the end of her defense. She grimaces. "I'm not- I know I'm not the conventional hire, but I figured, a lot of people go to college and don't learn anything anyways? This way, I can learn what I need to learn to get the job done and I don't have to be super into debt."

He looks surprised by her outburst. She isn't sure if it's a good or bad thing. She's hoping it's good.

"Or something?" she adds uselessly. Something like nausea swirls in her stomach as she thinks of all the worst-case scenario. Maybe he's already clicked on the button underneath the desk and his security team are going to barge in any second to drag her out. It'll be a humiliating lesson. She braces herself for it. "Say something, please." Her voice sounds like it's begging.

"You're not at all what I expected," he says and there's a hint of a smile there, so she lets herself hope a little bit more that he isn't going to kick her out. At least not right away.

"What did you expect?" she asks, can't help but be curious, eager to do what he wants in order to secure a job here.

She hadn't expected to hear back from the company, really. It's one of the business and most powerful corporations in the country, with hundreds more buildings like this one all over. They deal with pharmaceutical products, production, procurement, distribution and all that. She did a bunch of reading prior to coming here, but she's aware that there's only so much she can learn from a book.

He shrugs. "I expected you to take your clothes off and give me another reason to hire you."