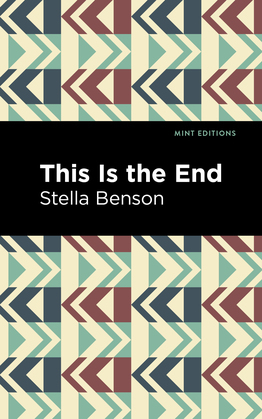 This is the End

This Is the End (1917) is a novel by Stella Benson. Based on the author’s experience in the movement for women’s suffrage, This Is the End is a story of identity and social class set in the London neighborhood of Hackney. As Jay attempts to break from her restrictive past, her brother Kew returns from the First World War scarred by his experiences and disillusioned with life at home. Benson’s meditative, diaristic prose guides the reader along the paths of change and confrontation faced by her protagonists, immersing them in the tumultuous decade in which the novel was written. “This is the end, for the moment, of all my thinking, this is my unfinal conclusion. There is no reason in tangible things, and no system in the ordinary ways of the world. Hands were made to grope, and feet to stumble, and the only things you may count on are the unaccountable things. System is a fairy and a dream, you never find system where or when you expect it. There are no reasons except reasons you and I don't know.” Guided by a philosophical sense of the world, Jay—formerly Jane Elizabeth—longs to escape the confines of her life in the countryside. Without telling her family, she leaves for London and adopts a new identity, exposing herself for the first time in her life to the rhythms of working-class existence. When her brother Kew returns from the Great War and fails to find her at home, he comes to the city in search of his sister. Bonded by tragedy, the two orphans grow to respect one another as adults, both of them scarred in their own way by the expectations placed on young men and women in a decade of tremendous cultural change. With a beautifully designed cover and professionally typeset manuscript, this edition of Stella Benson’s This Is the End is a classic work of British literature reimagined for modern readers.