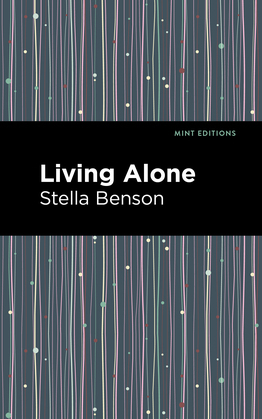 Living Alone (1919) is a novel by Stella Benson. Considered a pioneering work of fantasy fiction, Living Alone is a story of magic set in London during the First World War. Benson’s meditative, diaristic prose guides the reader alongside her protagonist, a young woman introduced to a world of witchcraft and wizardry at “the House of Living Alone.” “Nothing else happened in that room. At least nothing more important than the ordinary manifestations attendant upon magic. The lamp had tremulously gone out. Coloured flames danced about the Stranger's head. One felt the thrill of a purring cat against one's ankles, one saw its green eyes glare. But these things hardly counted.” Guided by her political commitments, Sarah Brown dedicates herself to charity work during the First World War. When a witch invites her to stay in a mysterious home, Sarah embarks on the adventure of a lifetime with her loyal dog David. Described by its author in playfully mysterious terms—“This is not a real book.”—Living Alone is a unique and haunting masterpiece that looks upon a tumultuous historical period with fresh perspective, presenting a story of growth and identity in an intoxicating world of magic and mystery. With a beautifully designed cover and professionally typeset manuscript, this edition of Stella Benson’s Living Alone is a classic work of British literature reimagined for modern readers.