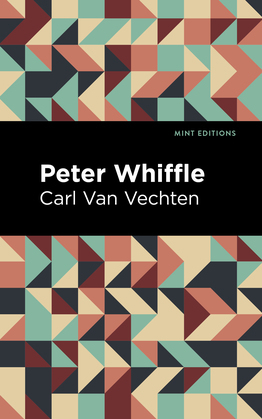 Peter Whiffle (1922) is a novel by Carl Van Vechten. Framing himself as his character’s literary executor, Van Vechten provides a satirical self portrait of his unusual life in the arts through the lens of a man whose sole gift is to identify and move with the avant-garde. Peter Whiffle is a writer who never writes. Throughout his travels, he claims to be researching for an important work of literature but mostly provides humorous portraits of some of the greatest artists, dancers, and writers of his time. In this way, he proves himself much more of a mirror than a window—like Van Vechten likely sensed of his own writing, Whiffle is a man who reflects the success and genius of others much more than he offers his own. Travelling between New York City and Europe, Whiffle becomes a figure who defines his generation through keen wit and tongue-in-cheek wisdom, a tour guide to a vast land of cultural creation and bohemian excess. Peter Whiffle, Van Vechten’s debut novel, is a fascinating work of fiction from a man who was always one step ahead of the rest. With a beautifully designed cover and professionally typeset manuscript, this edition of Carl Van Vechten’s Peter Whiffle is a classic of American literature reimagined for modern readers.