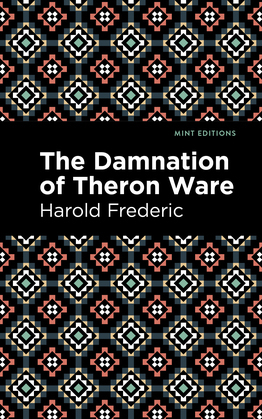 The Damnation of Theron Ware

The Damnation of Theron Ware (1896) is a novel by Harold Frederic. Inspired by his upbringing in Utica, New York, The Damnation of Theron Ware is a story of faith, community, and rural life from an underappreciated master of American realism. A bestseller in the year of its publication, the novel has earned praise for its criticism of cultural and religious hypocrisy in nineteenth century provincial life. “No such throng had ever before been seen in the building during all its eight years of existence. People were wedged together most uncomfortably upon the seats; they stood packed in the aisles and overflowed the galleries; at the back, in the shadows underneath these galleries, they formed broad, dense masses about the doors, through which it would be hopeless to attempt a passage.” Despite his young age, Theron Ware has been appointed pastor of a small-yet-lively Methodist congregation in the Adirondack Mountains of New York. As he settles into his role and attempts to gain the trust of the townsfolk, he begins to doubt himself as a messenger of God and to question the role of the Methodist church in the life of humankind. Influenced by local Catholics and a passionate Darwinist, Ware starts to dream of changing his life, of leaving the world of faith and salvation behind him. With a beautifully designed cover and professionally typeset manuscript, this edition of Harold Frederic’s The Damnation of Theron Ware is a classic work of American literature reimagined for modern readers.