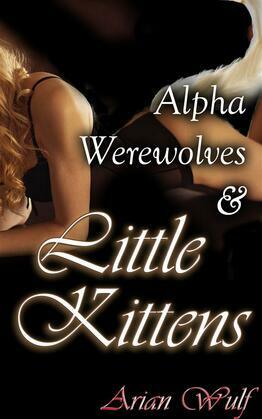 Aria is eighteen-years-old. Her favorite food is fish. She enjoys long naps whilst curled up at high places. She's a Cat Shifter with more cat-like characteristics and physical proof of her animal than most Shifters, which normally means she should be put in a special facility, but her parents want her to be human, so she pretends as much as she can. Until she's caught by two Alpha Werewolves.

She wakes up slowly, drifting back to consciousness while stretching her arms and legs out, purring because the bed she's sleeping in is perfectly warm and there's a nice warm light from the window shining directly on her. There are clouds painted on the ceiling with colorful birds in mid-flight. Her head feels a little fuzzy and she tries to recall why she isn't surrounded by the familiar pink of her ceiling at home.

Memories of the day before bombards her and she hisses awake, sitting up on her hands and knees. There are bars in front of her, keeping her locked in. She tilts her head at it, confused. She's never been locked in before. It's a peculiar feeling, one that she thinks should be accompanied by panic, but isn't. She pushes aside the bar and opens the door easily. It's not even locked. And then she steps out of prison bed and her feet touches the cold ground and she whimpers, pulling her feet back and up the bed. Maybe... maybe she'll just stay here a little while, where it's nice and warm and is just the right place to be in the patch of sunlight.

She must have fallen asleep again at some point because when she wakes, she's somehow draped half off the bed gracelessly and she's so disoriented that she falls completely and hits her head on the floor. She lets out an unhappy yowl on impact, her eyes filling with tears instantly.

The door slams open and she blinks up at the sudden appearance of a giant black man. He lifts her up easily before she manages to gather her thoughts and think to run. "Poor kitten. Did you hurt your head?"

She tries to pull away, but he's really nice and warm and her thoughts are all jumbled up. He shifts her until she is cradled in his chest rather securely and he lifts her legs so that she's folded up like some sort of infant. She admits, she's rather small, but she's far from being mistaken for a child. She hisses at him. "Let me down!"

He frowns. "Are you feeling grumpy today, Kitten? You were so well-behaved yesterday."

It's her turn to furrow her brows now. Yesterday? She's fairly sure she wasn't here yesterday.

He rubs the back of her head gently and lets out continuous purring noises that makes her relax despite herself. He's pressing her head close to his heart and the sound of his heartbeat is steady and soothing. She finds herself leaning closer.

"Are you feeling better, Kitten?" he hums.