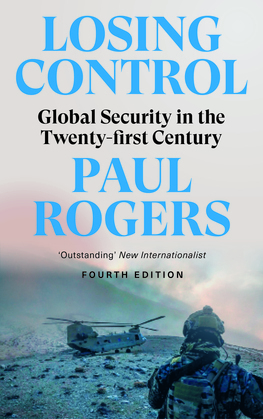 'Outstanding ... combines a glimpse behind the security screens with a sharp analysis of the real global insecurities - growing inequality and unsustainability' - New Internationalist

Written in the late 1990s, Losing Control was years, if not decades, ahead of its time, predicting the 9/11 attacks, a seemingly endless war on terror and the relentless increase in revolts from the margins and bitter opposition to wealthy elites.

Now, more than two decades later and in an era of pandemics, climate breakdown and potential further military activity in the Middle East, Asia and Africa, Paul Rogers has revised and expanded the original analysis, pointing to the 2030s and '40s as the decades that will see a showdown between a bitter, environmentally wrecked and deeply insecure world and a possible world order rooted in justice and peace.