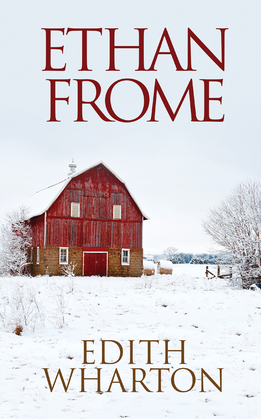 Ethan Frome, written in 1911 by Pulitzer Prize-winning American author Edith Wharton, is set in the fictitious town of Starkfield, Massachusetts. Against a backdrop of a cold, grey, bleak New England winter, a visiting engineer staying temporarily in town while working nearby, tells the story of his encounter with Ethan Frome, who is an isolated farmer trying to scrape out a living while tending to his frigid, demanding and ungrateful wife, Zeena.

The narrator’s initial impressions are based on his observations of Frome, watching as he goes about his daily tasks. Something about him catches the eye and curiosity of the visitor, yet no one in town wants to discuss or reveal many details about the strange man or his background.

The narrator ultimately finds himself having to stay overnight in Frome’s house in order to escape a fierce winter storm and is then able to observe Frome up close. When he shares his observations with others in town it triggers them to be more forthcoming with their own knowledge and impressions.

Ethan Frome is a man with a history of thwarted dreams and desires whose longing ends in an ironic turn of events. A bit of hope enters his life of despair when his wife’s cousin Mattie arrives. He falls in love with her and his life is transformed but their fate is doomed by the stifling conventions of the era.

This beautifully designed American Literature Classic presents compelling characters trapped in circumstances from which they seem unable to escape.