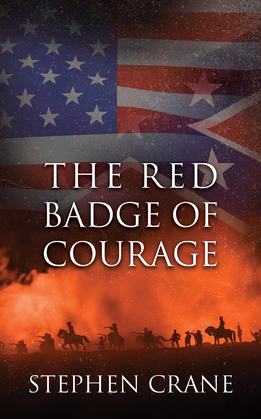 The Red Badge of Courage

Read this resonating tale that has never been out of print for over 100 years, in this beautifully designed volume.

This breakthrough novel of American literature changed the perception of what literature should be or do. It is considered to be one of the most influential war stories every written. Taking place during the American Civil War, the story is about a young private of the Union Army, Henry Fleming, who flees from the field of battle. It was published in 1895, a full thirty years after the American Civil War had ended and quickly became the benchmark for modern anti-war literature. Although author Stephen Crane was born after the war and never participated in battle himself, he was highly praised by the Civil War veterans for having captured a realistic impression of their actual battlefield experiences and emotions.

The book deals with the meaning of courage as the young protagonist,Henry Fleming, is cast into a literal "trial by fire" that will take the full measure of his courage.Crane carefully traces the development of this young soldier, detailing the hopes, fears and rationalizations of his career.

Fleming had joined the Union army because of his romantic ideas of military life, but soon finds himself in the middle of a battle against a regiment of Confederate soldiers. Terrified, Henry deserts his comrades. Upon returning to his regiment, he struggles with his shame as he tries to redeem himself and prove his courage with a wound, a “red badge,” so that none could accuse him thereafter of any inappropriate action.