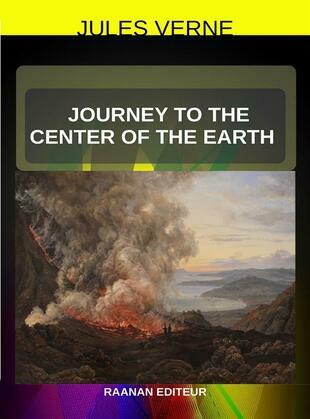 Journey to the Center of the Earth

Journey to the Center of the Earth (French: Voyage au centre de la Terre), is a classic science fiction novel by Jules Verne. Professor Otto Lidenbrock is the tale's central figure, an eccentric Germanscientist who believes there are volcanic tubes that reach to the very center of the earth. He, his nephew Axel, and their Icelandic guide Hans rappel into Iceland's celebrated inactive volcano Snæfellsjökull, then contend with many dangers, including cave-ins, subpolar tornadoes, an underground ocean, and living prehistoric creatures from the Mesozoic and Cenozoic eras. Eventually the three explorers are spewed back to the surface by an active volcano, Stromboli, in southern Italy.
The category of subterranean fiction existed well before Verne. However his novel's distinction lay in its well-researched Victorian science and its inventive contribution to the science-fiction subgenre of time travel—Verne's innovation was the concept of a prehistoric realm still existing in the present-day world.
Plot
| The story begins in May 1863, at the Lidenbrock house in Hamburg, Germany. Professor Otto Lidenbrock dashes home to peruse his latest antiquarian purchase, an original runic manuscript of an Icelandic saga written by Snorre Sturluson, "Heimskringla", a chronicle of the Norwegian kings who ruled over Iceland. While leafing through the book, Lidenbrock and his nephew Axel find a coded note written in runic script along with the name of a 16th century Icelandic alchemist, Arne Saknussemm. Lidenbrock and Axel transliterate the runic characters into Latin letters, revealing a message written in a seemingly bizarre code...| |Wikipedia|