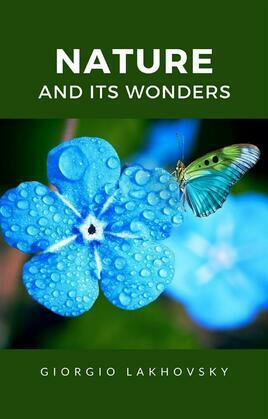 Nature and its wonders (translated)

Nature! What domain of spirit as well as of matter does this prestigious word not contain? Nature, but all that our senses allow us to conceive of it can only give us a pale reflection of its omnipotent power.
In my book, The Secret of Life, I have already tried to lift a corner of the veil by examining some special problems posed by biology, especially those of the instincts of animals, the life of our cells, and the struggle of the organism against microbes.
In my other work, The Universion, I attempted to give an explanation of the structure of the world, I showed the function of all the forces and fluids, the raison d'être of all the corpuscles, electrons, protons, ions, atoms and molecules that "convey" the universal power in this supreme medium scattered in the infinity of space and time, which I called the Universion. I showed that thought could be likened to a vibration and that this vibration allowed us to reach the very concept of God.
In the volumes Matter and The Great Problem, I attempted to anatomise another mystery of nature, that of matter, showing how it arose from radiation in the same way that it gives rise to radiation.
I have attempted to show that matter is not, in truth, the product of a creation, but that of a reproduction to which I have given the name of materialisation.
Thanks to this new basic principle, it is possible to conceive that our ephemeral bodily life, if it disappears at one point in space, nevertheless continues to exist on other stars, on which we reproduce ourselves eternally.
In this new volume, I shall again attempt to wrest from nature some of its secrets, the mystery of which we have not yet succeeded in penetrating: electricity, T. S. F., the thought-vessel. S. F., thought-vibration, autosuggestion, animal and human magnetism, homeopathy and dowsing.
All these sciences, which are at present in progress, and whose exciting evolution we are demonstrating, hold in store for mankind unsuspected surprises, the consequences of which will upset our whole conception of the universe.
Certainly, alas! The more we try to get closer to the goal by penetrating more deeply into the secrets of Nature, the more we feel our powerlessness to discover its absolute meaning.
The scientist who devotes his entire life to scientific research is nothing more than a bee returning a molecule of honey to the hive.
But the light and intense faith that Nature gives us encourage us and console us for the mediocrity of the results we obtain.
Let us, therefore, always strive for a higher truth, as far as our brain can help us. It is the sole raison d'être of our miserable earthly life.