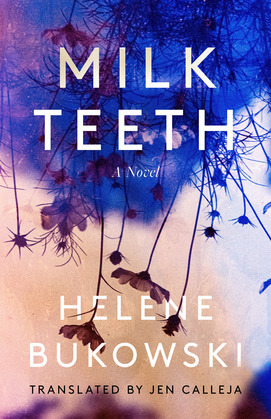 by Helene Bukowski (Author), Jennifer Calleja (Translator)
Buy for $12.99 Excerpt
Fiction Literary Germanophone literature
warning_amber
One or more licenses for this book have been acquired by your organisation details

"Like Sophie Macintosh in The Water Cure or Diane Cook in The New Wilderness, Helene Bukowski imagines a pocket landscape where the concerns of our world can be contained and considered, a defamiliarized place that skews increasingly uncanny without ever becoming unrecognizable. Written with precision and poise, Milk Teeth is a moving depiction of survival and perseverance, and of how we might choose new families and communities in the face of an increasingly hostile world." —Matt Bell, author of Appleseed

Skalde writes her thoughts on pieces of paper, making new discoveries and revelations, and finding scraps with which to understand her limited world. Her mother Edith tells her little, preferring the solitude of her room. Their house is full of silence, and secrets.

Skalde has only ever known life in the territory, a terrain of farms and forest cut off from the rest of the world. They are isolated further, as decades since Edith’s arrival in the territory she is still viewed as an outsider by their remaining neighbors. A heavy fog hangs over the territory, Skalde has never seen blue in the sky her entire childhood― but one day the fog dissipates, and is replaced by an oppressive, perpetual heat. The territory dries out, and its people become increasingly erratic, and desperate.

When Skalde finds a girl called Meisis in the forest, Skalde instantly feels she must care for her and brings her in. They form a family unit, in spite of Skalde’s increasing frustrations and anger with Edith and the urgent need to keep Meisis hidden. Meisis’s presence means there has been a serious breach in security for the territory, and soon neighbors find a way to blame Meisis’s arrival on other changes.

Beautifully written in immersive, spare prose, Helene Bukowski’s debut novel is about what it means to care for one another at the end of the world, about living with the impacts of climate change, and nationalism and the way we view “outsiders.” Jen Calleja’s translation from German is a lively rendition of this modern-day fairytale, of three women living on the brink.