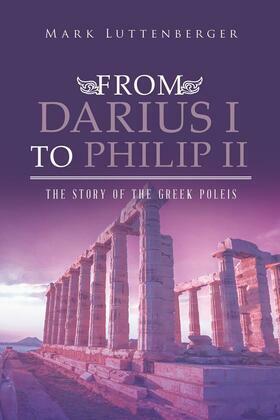 From Darius I to Philip II

The Story of the Greek Poleis
by Luttenberger,Mark (Author)
Buy for $9.99 Excerpt
Nonfiction History History by country Europe
warning_amber
One or more licenses for this book have been acquired by your organisation details

The topic of inquiry is a political, military, and economic study of classical Greece from 500 to 336 BC. The book begins with the reign of Darius I of Persia and ends with the reign of Philip II of Macedon. It encompasses the Greek world from Asia Minor to Sicily and Italy. The primary emphasis is on the Greek world around the Aegean Sea and Macedonia.
The book's central theme is the story of the various poleis that inhabit the Greek world. In this history of the classical age, you will encounter the famous cities of Athens, Sparta, Thebes, and Syracuse. All sought hegemony in the Greek world. In addition, you will discover that there were approximately eight hundred poleis during the classical period. Whether large or small, all played their part. Corinth, Olynthus, Mytilene, Miletus, Byzantium, and others played significant roles during the heyday of Greece.
From the Greeks' successful defense of freedom against Darius I and Xerxes to their subjection by Philip II, you will encounter the men and events that have passed into legend. Miltiades, Themistocles, and Pausanias led Athens and Sparta against Persia. Marathon, Thermopylae, Salamis, and Chaeronea are symbols of freedom and courage. You will view the glory of Athens under Pericles and its defeat by Sparta. The demise of Sparta under Agesilaus will be recounted. The rise of Thebes under Epaminondas will be reviewed. Finally, the emergent star of Philip II will be described. The book concludes with Philip's assassination and the accession of Alexander the Great.
To counterbalance the political disunion of the Greeks, you will witness the unity of Greek culture displayed through economics, religion, the arts, and the Panhellenic games. This rainbow of themes will illustrate the story of Greece in the classical age.