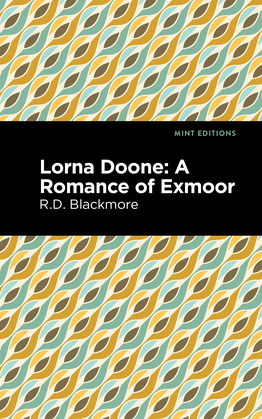 Lorna Doone: A Romance of Exmoor (1869) is a novel by Richard Doddridge Blackmore. Praised by some of Victian England’s leading authors, including Robert Louis Stevenson, George Gissing, and Thomas Hardy, Lorna Doone was published anonymously and sold poorly in its first edition. Republished the following year in an inexpensive format, the book became a huge success for Blackmore, and remains his only novel in print. Raised in the hill country of Exmoor, John Ridd is forced to take over his family farm at a young age following his father’s murder at the hands of the Doone clan. Determined to succeed, he endeavors to do right by his mother and younger siblings, raising their crop by the banks of Badgworthy Water. Ready to put the past behind him, he unexpectedly falls for the beautiful Lorna, the granddaughter of Sir Ensor Doone. When Ensor dies, the Doone estate passes to her cousin Carver, who believes he is destined to marry Lorna. Forced to flee to John’s farm at Plover’s Barrows, Lorna—whose true identity endangers her life—hides from her cousin Carver at the home of a family which knows all too well the dangers of trusting a Doone. With a beautifully designed cover and professionally typeset manuscript, this edition of Richard Doddridge Blackmore’s Lorna Doone: A Romance of Exmoor is a classic work of English literature reimagined for modern readers.