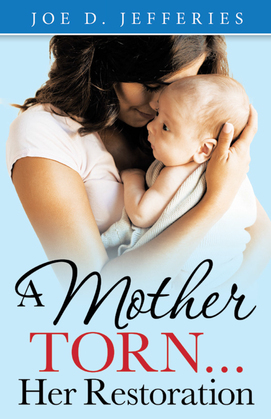 “A Mother Torn...Her Restoration” is about a mother, Helen V. Washington prayed to God for a husband, and three children.
She married John Washington. They agreed no baby until they were financially prepared. She became pregnant early. They both disputed in anger.
She gave birth to Gravita. Seven years later Helen prayed for her sons. This day she was torn. Her husband was killed. She lost belief in God.
She could not tell Gravita her father was dead. For hours she noticed her daughter staring out the window looking for her father.
Helen’s older sister, Barbara Sneakly, warned Helen to tell Gravita or she would. That evening Gravita was torn as her mother told her.
At the age of seventeen, in anger, Gravita left home because her mother would not let her hang out with friends.
Helen lost custody of her daughter to Barbara Sneakly. Two months later Gravita was accidentally killed. Helen hated her sister and accused her of killing Gravita. Barbara took her own life. Daniel Sneakly and Helen held each other as they morned. That same night Daniel killed himself.
A year later Helen met Willy Terell Jackson. Helen’s belief in God is restored. She learned that she and Willy had similar dreams. A year and a half later they were married. A year later she gave birth to a girl she named Gravita.
Two years later she gave birth to twin boys. She realized God had always heard her prayers. She gave thanks to God for her Restoration.