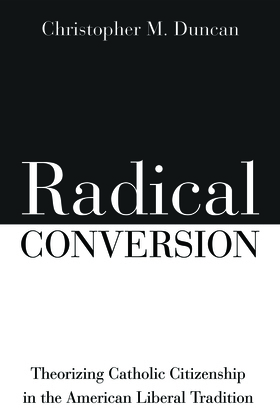 Radical Conversion utilizes both analytic and normative philosophic/theoretical frameworks to study the relationship between Christian-Catholic conceptualizations of politics, citizenship, faith, and religion as viewed through a quasi-theological lens. The work is situated in the context of the American liberal tradition and in conversation and debate with the public philosophy that attempts to sustain it and provide a rationale for its perpetuation. In a single sentence, the book's thesis is that for America to fully realize its authentic and unique moral and political mission and secure it into the future, it will need to become both more Catholic and more catholic. Concordantly, that mission, properly understood, is nothing less than the recognition and protection of the idea of the sacredness of every individual human person and their right to flourish and realize the fullness of their particular vocation as a child of God.