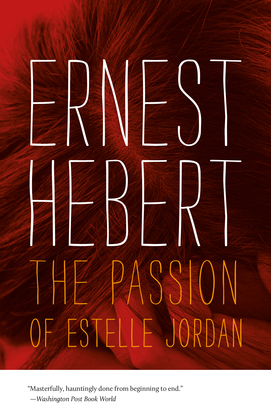 The Passion of Estelle Jordan

The Darby Chronicles #4
by Ernest Hebert (Author)
Buy for $19.99 Excerpt
warning_amber
One or more licenses for this book have been acquired by your organisation details

A major character in earlier Darby novels, Estelle takes center stage in The Passion of Estelle Jordan. Presently she is sliding into late middle age, drawn to two lovers who could not be more different: the widowed farmer Avalon Hillary and a mysterious young punk Estelle calls Trans Am in honor of the car he drives. And there's a threat, not to Estelle—she can take care of herself—but to Noreen Cook, a younger woman Estelle sees as a version of her own secret, vulnerable self. Putting herself in Noreen's shoes to save her, Estelle may be in for way more than she bargained for. The Passion of Estelle Jordan, like that of Christ, is rife with sin, suffering, sacrifice, and perhaps redemption.

The Passion of Estelle Jordan is for anyone going through a change of life.