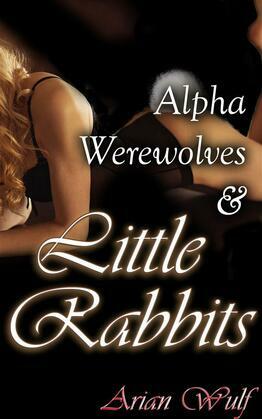 Anastasia is a prisoner in a cell with a Master who has little use for her except to admire her pretty rabbit ears and cute bunny tail. She's a very pretty little thing. Her Master reminds her of that every time he shows her off. The last thing she expects is a rescue. The Alpha Werewolf in charge of breaking her out of her prison cell doesn't want to keep her in a cage. He wants to claim her.

"Isn't she just lovely? I've always found the scent of her fear particularly delectable," Master murmurs, pinching her chin and pointing her face towards the wolf.

He's not as big as Master, but he has muscles where Master has fat and he moves with an air of ease, like he's used to being the most powerful predator in the room and being here, now, even with Master's many Bear Shifters as his bodyguards, he is not frightened at all.

"She's very small," he says, eyeing her with those golden eyes, his gaze growing more terrifying the longer she stares.

Master makes a noise, like he wants to argue, but decides to nod jerkily instead.

She is rather small, but only because they're unnaturally large. She wants so terribly to look away, but Master's grip on her chin hurts and she doesn't. "May I?" he asks, gesturing at Master's hand so he may touch her ears.

Master releases his meaty fingers from her ears and he captures them in a hold that is surprisingly gentle despite the strength that she knows he's hiding in his palms. He holds her chin as well and his fingers swipe across the blood beading at the surface, like he's trying to groom her. There's something about his grip that is awfully familiar.

"It's alright," he hums in a quiet, rumbling way that is probably meant to soothe her, but only makes her heart beat faster. He leans in close enough for his nose to touch her forehead and then inhales deep. "You're right," he rumbles. "The scent of her fear is quite heady." But he isn't saying it the way Master said it. He doesn't sound like he particularly enjoys her fear at all.

"I've always wondered if she would taste like rabbit," Master says contemplatively and her blood runs cold. The wolf's grip on her chin tightens for a fraction of a second, and then relaxes, his expression unreadable. She wishes she could figure him out, but she knows it's useless. It's not like she would be able to fight back even if they did decide to roast her over a fire.

"Perhaps," he says in that cool, unaffected tone that she hopes is only a facade.

For all she knows, he's actually considering the idea of cooking her. Her eyes burn and when she blinks, tears trickle down her cheeks.

"Poor frightened thing," the wolf says with a terrifying gentleness, leaning down to lick up her cheeks, tasting her tears. His tongue is rough and warm against her delicate skin and she whimpers, trying to pull away. He isn't so much gripping her ears as he is cradling the back of her neck to keep her from collapsing into a terrified puddle. He leans back and rumbles, "How much?"

Master startles and blinks at him wordlessly for several seconds, at a loss for words.

"How much do you want for her?" the wolf asks like he's talking to someone who's heavily mentally impaired.

"I- She- She's not for sale?" Master responds, sounding uncertain all of a sudden.

His eyes narrow. "Why show her to me if you do not intend to sell her?"