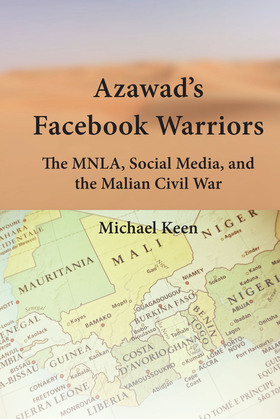 In January 2012, the National Movement for the Liberation of Azawad (MNLA), a group dominated by members of the Tuareg ethnic group, launched a military uprising seeking the independence of Mali’s vast but sparsely populated north as the democratic, secular nation-state of Azawad. Azawad’s Facebook Warriors tells the extraordinary story of a small group of social media activists who sought to broadcast the MNLA’s cause to the world. Azawad’s Facebook Warriors offers a groundbreaking new study of the MNLA’s use of social media through the original analysis of more than 8,000 pro-MNLA Facebook posts published over a four-year period and interviews with key architects of the MNLA’s media strategy. The book further places the MNLA’s social media activism in context through a nuanced treatment of northern Mali’s history and an unparalleled blow-by-blow account of the MNLA’s role in the Malian civil war from 2012 through 2015. More broadly, through the case study of the MNLA, the book argues that studying rebel social media communications, a field that has until now unfortunately received scant scholarly attention, will prove an increasingly important tool in understanding rebel groups in coming years and decades.