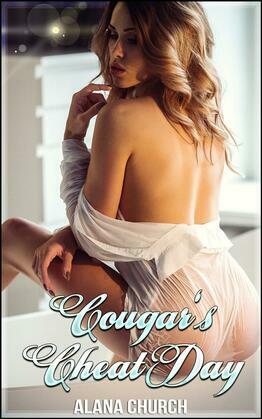 Kendall Fisher isn't happy. The sexy cougar just broke up with her boyfriend and wants to lose some weight. Luckily, the good-looking college student next door will provide a handy distraction. An afternoon in bed will satisfy a different sort of hunger, and burn off some calories in hot, sweaty sex. Neighbors become lovers on the "Cougar's Cheat Day!"

Across the way, a light flashed on upstairs in Kendall Fisher's house. Scott stared at it absently, his mind a thousand miles away.

Scott's mouth fell open. Since Kendall Fisher had moved in about three years ago, he couldn't remember a single time he had ever see the inside of her house. Certainly not her bedroom. Like most people, and especially most single women, she didn't seem too fond of the idea that anyone who wanted could take a look inside. But now the curtains were wide open. The angle was wrong for him to see the bed, but he could see the glow of a lamp in one corner, and what looked to be some artwork hanging from the walls.

And Kendall of course. The older woman stared pensively out into the night, her face soft, without the tense edge that always seemed to linger in the corners of her eyes and mouth whenever she and Scott happened to speak. Was she sad? Happy? Simply tired?

But she was. Scott watched, open-mouthed, as Kendall untied the belt of her robe. It hung open, exposing her stomach and then, gloriously, the incredible curves of her large breasts. A shrug, and it fell off her shoulders, and she was naked from the waist up.

Damn. She's incredible. Kendall's breasts were even larger than he'd thought. But obviously real, not a pair of bolt-ons that she'd had installed by a plastic surgeon, like a guy overcompensating for a small dick by getting a lift-kit put into his pick-up. Not droopy and saggy, but firm and proud.

Scott was suddenly, achingly erect inside his shorts. At that moment, all he wanted was to be in the same room with Kendall, to hold her womanly body in his arms, to be able to feel the heft of her breasts in his hands.

And that feeling only intensified when his sexy neighbor began to touch herself. It started slow, with a hand rising, fingers whispering the outside curve of one gorgeous breast. But soon she was squeezing it firmly, rhythmically, and her other hand slid down her stomach. Scott couldn't see what she was doing, but when her eyes closed and her lips parted in a moan he could almost hear, it wasn't too hard to figure out.

God. I wish I was there. Through his shorts, he was holding his own erection. The heel of his hand ground down on his staff, sparking pleasure.

And then Kendall's eyes opened, and it seemed that their gazes locked, across thirty yards of muggy Iowa air.

Scott panicked, almost falling out of his chair. Shit! Can she see me?! She has to be able to see me, right? I'm right here! Oh, God, I'm dead!