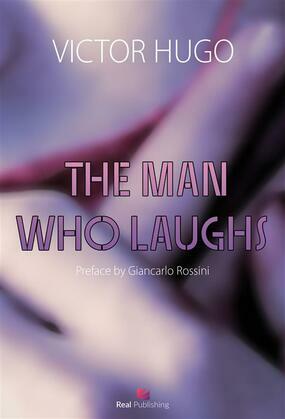 The Man Who Laughs

The Man Who Laughs (also published under the title By Order of the King from its subtitle in French) is a novel by Victor Hugo, originally published in April 1869 under the French title L'Homme qui rit. It takes place in England in the 1680s and 1700s, during the reigns of James II and Queen Anne, respectively, and depicts England's royalty and aristocracy of the time as cruel and power-hungry. Hugo intended parallels between the England depicted and the France of Louis-Philippe and the Régence.
The novel concerns the life of a young nobleman, also known as Gwynplaine, disfigured as a child (on the orders of the king), who travels with his protector and companion the vagabond philosopher Ursus and Dea the baby girl he rescues during a storm. The novel is famous for Gwynplaine's mutilated face, stuck in a permanent laugh. The book has inspired many artists, dramatists and film-makers.
Hugo wrote The Man Who Laughs, or the Laughing Man, over a period of 15 months while he was living in the Channel Islands, having been exiled from his native France because of the controversial political content of his previous novels. Hugo's working title for this book was By Order of the King, but a friend suggested The Man Who Laughs.[citation needed] Despite an initially negative reception upon publication,[4][5] The Man Who Laughs is argued to be one of Hugo's greatest works.
In his speech to the Lords, Gwynplaine asserts:
Je suis un symbole. Ô tout-puissants imbéciles que vous êtes, ouvrez les yeux. J’incarne Tout. Je représente l’humanité telle que ses maîtres l’ont faite.
I am a symbol. Oh, you all-powerful fools, open your eyes. I represent all. I embody humanity as its masters have made it.
— Gwynplaine, in Part 2, Book 8, Chapter VII
Making a parallel between the mutilation of one man and of human experience, Hugo touches on a recurrent theme in his work "la misère", and criticizes both the nobility which in boredom resorts to violence and oppression and the passivity of the people, who submit to it and prefer laughter to struggle.
A few of Hugo's drawings can be linked with L’Homme qui rit and its themes. For instance the lighthouses of Eddystone and the Casquets in Book II, Chapter XI in the first part, where the author contrasts three types of beacon or lighthouse ('Le phare des Casquets' and 'Le phare d'Eddystone' – both 1866. Hugo also drew 'Le Lever ou la Duchesse Josiane' in quill and brown ink, for Book VII, Chapter IV (Satan) in part 2.