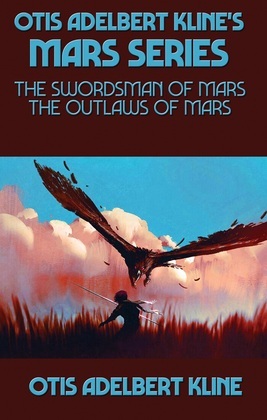 by Otis Adelbert Kline (Author)
Buy for $0.99 Excerpt
Fiction Science fiction Adventure Space opera and planet opera
warning_amber
One or more licenses for this book have been acquired by your organisation details

Harry Thorne had lost everything: his business, the love of his life, even his own self respect. As he’s contemplating suicide he’s made an incredible offer. He can go back in time and switch places with a look alike who lived on Mars millions of years ago when it was a lush, beautiful planet full of promise and adventure. Seizes his last chance at salvaging his life is transported millions of years into the past to a Mars peopled with beautiful women, mighty warriors, fearsome beasts, and awesome magics.


Jerry Morgan, is a man with no future on Earth, he is offered a new life on Mars and he takes it. He starts out his new life on Mars on the wrong foot by meeting a princess and killing the fearsome-looking Martian he wrongly believes is menacing her. Which in actuality is the princess’s beloved pet.


From there Morgan becomes entangled in the politics of the Byzantine Martian royal court, spurns the advances of a would-be lover, escapes his hosts and role as an expendable political pawn. Various adventures follow, with dazzling swordplay, feats of strength, and other trials, tribulations and treacheries.


Kline’s Mars has multiple parallel canals, surrounded by walls and terraces, and the construction of the canals by Martian machines is described. The story has a race-war element that may jar the modern reader.