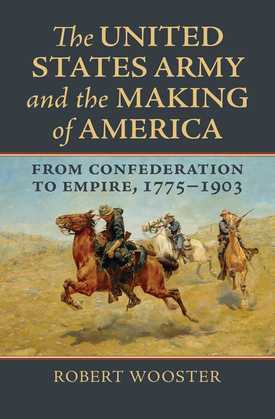 The United States Army and the Making of America

The United States Army and the Making of America: From Confederation to Empire, 1775–1903 is the story of how the American military—and more particularly the regular army—has played a vital role in the late eighteenth- and nineteenth-century United States that extended beyond the battlefield. Repeatedly, Americans used the army not only to secure their expanding empire and fight their enemies, but to shape their nation and their vision of who they were, often in ways not directly associated with shooting wars or combat. That the regular army served as nation builders is ironic, given the officer corps’ obsession with a warrior ethic and the deep-seated disdain for a standing army that includes Thomas Jefferson’s Declaration of Independence, the writings of Henry David Thoreau, and debates regarding congressional appropriations. Whether the issue concerned Indian policy, the appropriate division of power between state and federal authorities, technology, transportation, communications, or business innovations, the public demanded that the military remain small even as it expected those forces to promote civilian development.

Robert Wooster’s exhaustive research in manuscript collections, government documents, and newspapers builds upon previous scholarship to provide a coherent and comprehensive history of the U.S. Army from its inception during the American Revolution to the Philippine-American War. Wooster integrates its institutional history with larger trends in American history during that period, with a special focus on state-building and civil-military relations.

The United States Army and the Making of America will be the definitive book on the army’s relationship with the nation from its founding to the dawn of the twentieth century and will be a valuable resource for a generation of undergraduates, graduate students, and virtually any scholar with an interest in the U.S. Army, American frontiers and borderlands, the American West, or eighteenth- and nineteenth-century nation-building.