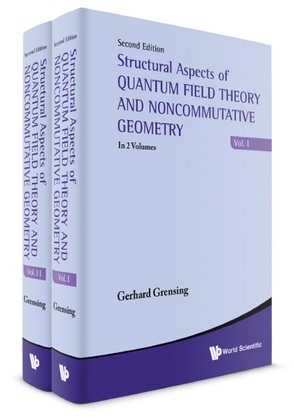 The book is devoted to the subject of quantum field theory. It is divided into two volumes. The first volume can serve as a textbook on main techniques and results of quantum field theory, while the second treats more recent developments, in particular the subject of quantum groups and noncommutative geometry, and their interrelation.The second edition is extended by additional material, mostly concerning the impact of noncommutative geometry on theories beyond the standard model of particle physics, especially the possible role of torsion in the context of the dark matter problem. Furthermore, the text includes a discussion of the Randall-Sundrum model and the Seiberg-Witten equations.Contents:

Readership: Advanced undergraduate and graduate students, researchers in particle physics, theoretical physics, and mathematical physics.Quantum Field Theory;Path Integral Quantization;Anomalies and Index Theorems;Noncommutative Geometry;Dark Matter and Torsion;Quantum GroupsReviews of the First Edition:This self-contained, comprehensive first volume presents a fundamental and careful introduction to quantum field theory. It will be welcomed by students as well as researchers, since it gives an overview of the origin and development of the basic ideas of modern particle physics, quantum statistical mechanics and the mathematics behind. The book provides a rich collection of modern research topics and references to important recent published work. - Zentralblatt MATH

The publication of this authoritative and comprehensively referenced two-volume set, written in somewhat condensed but eminently lucid style and explaining the principal underlying concepts and most important results of QFT, is particularly timely and useful. I am pleased to recommend most heartily this important reference source to students and physicists and to those concerned with the philosophy of science. - George B KauffmanProfessor Emeritus of ChemistryCalifornia State University, Fresno

'The book is primarily addressed to physicists. Nevertheless, as numerous examples are known in which exploration of the land where physics and mathematics overlap (and which quantum field theory definitely belongs to) resulted in important developments in mathematics, many mathematicians may also find this book interesting and even inspiring.' - MathSciNet