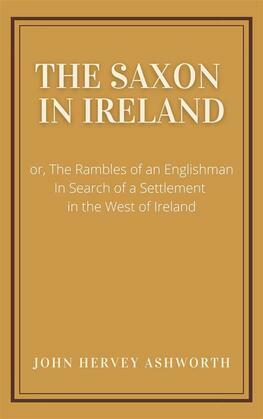 The Saxon in Ireland

“The Saxon in Ireland: or, The Englishman in Search of a Settlement in the West of Ireland,” published in 1851 by John Hervey Ashworth, discusses the prospects of redeveloping lands in Ireland at the time,  more than twenty years after the potato famine devastated Ireland, explained in terms helpful to English emigrants looking to resettle there. The state of Irish culture and society, agriculture and labour are analyzed and the limitations imposed by that country’s legal system discussed. There is evidence that in the early 1850s Reverend John Hervey Ashworth (1795-1882) bought lands in the barony of Burrishoole, county Mayo, from the sale of the O’Donel of Newport estate but appears to have sold them on very rapidly to Alexander W. Wyndham. “The General Armoury” refers to Ashworth of Ashworth and Hall Carr, Co. Lancaster and Elland Bank, in Yorkshire, represented by Reverend John Hervey Ashworth (page 29). Thomas Ashworth, who also had Lancashire connections, purchased the Galway fishery in the Encumbered Estates' Court in 1852. (Source: National University of Ireland Galway, Landed Estates Database.)