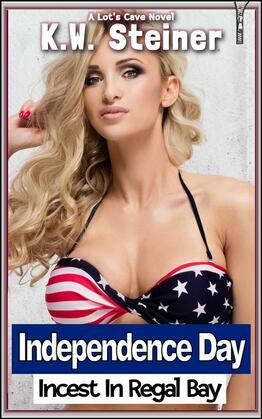 DESCRIPTION:
It’s the 4th of July weekend and Jack Beach wants to spend it with his daughter and her family. Instead, he is treated to a weekend of incest aboard his yacht at the hands and mouths of his granddaughter Lara and her nymphomaniac friend Braelynn.

EXCERPT:
Jack was stunned into silence for a long minute, taking in the sight still before him. Two very attractive, naked young women. The aroma of sex hung heavy in the bedroom and he breathed it in as he tried very hard to figure out what he should do next. It was the aroma of his granddaughter, her sex, and it hit him in all the wrong places. He immediately felt a stirring in his trousers, a stirring he’d not enjoyed for a very long time, and not often in the years following the loss of his wife of nearly fifty years.

Finally, Jack managed to stammer, “I’m so sorry…I didn’t know…Your mother said you would be at work…” He backed out of Lara’s room, hands held up as if to ward off the vision of two naked young women, and hurried back to the living room.

Jack was about to exit the front door when Lara called, “Wait! Grandpa, don’t go!” He turned around to find her leaping off the last few steps to rush for him. “I haven’t seen you in so long!” She dove into his arms and hugged him tight. Jack was happy that she had pulled on a robe to cover her nudity and hugged her back equally. “I didn’t know you were coming.”

“I wanted to surprise you,” he said. “I called your mother this morning, after I docked, and she told me that they had taken a trip with Logan’s class, but that you were staying behind to work. She said that she’d call or text you, to let you know that I was in town, and that I’d be coming over.”

Lara replied, “I guess I haven’t checked my phone in a while.” She stepped back and he saw her blushing. After a moment, she shyly grinned, “I guess you weren’t ready for that, eh?”