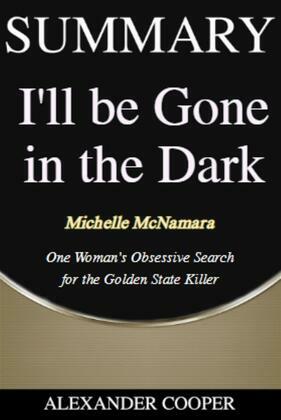 Summary of I'll Be Gone in the Dark

Summary of I'll Be Gone in the Dark

The late Michelle McNamara was a remarkable writer who had uncompromising attention to detail and a relentless obsession to uncover the truth. In her book, I’ll be Gone in the Dark, McNamara wrote about the mystery surrounding the man she dubbed the Golden State Killer. McNamara visited crime scenes, met with investigators and police, talked with survivors and victims’ family members, and poured over a long-neglected cache of documents. She used social media and enlisted the help of an online community of fellow investigators to hone in on the serial rapist and killer.
The book is a chronological account of the crimes of the killer during the 1970s and 1980s throughout California. The Golden State Killer was a brazen criminal who is associated with at least 12 murders and 45 rapes. McNamara painted a chilling picture of his methodical attention to detail and his total lack of empathy for any of the people he attacked. The killer took time to get to know his victims before each attack, often entering their homes and going through their personal items in advance of his crimes. He had information about when they left their homes and when they returned. Often, the killer knew the precise time that a husband departed for work, leaving the female alone and vulnerable. The killer made comments that indicated that he watched his victims. Once, he told one victim to leave her high heels on when he raped her and referenced her tendency to wear stilettos when she was making love to her husband.
The killer was methodical and precise. His modus operandi was consistent, leaving little doubt that the same person committed many crimes. He often used things he found in the homes and yards as weapons to kill and torture his victims. The Golden State Killer frequently tied his victims securely using Diamond knots in multiple crimes. Frequently, he would attack a couple and tie up the man while he raped the woman. The killer placed cups and saucers on the backs of male victims, so he could hear the dishes fall if the man attempted to get up. Investigators compared many of his techniques to tactics used in guerrilla warfare. The murderer sometimes cried and occasionally called out for his mother. The patterns in each crime were similar. One investigator said that the killer was very good at what he did, but he repeated the same basic things at each location.
At many of the crime scenes, the Golden State Killer went into the kitchens where he ate food from the refrigerator in between his brutal attacks. Occasionally, he left bread and milk on the counter to demonstrate to investigators that he committed the heinous crimes in leisure.
McNamara never lived to see the Golden State Killer arrested. In her epilogue, she wrote, “One day soon you’ll hear a car pull up to your curb, an engine cut out. You’ll hear footsteps coming up your walk.” She died before police arrested 72-year-old Joseph James DeAngelo for the crimes based on DNA evidence. When she died, the book was just half finished. Her husband, Patton Oswalt, was determined to see the project completed. He hired Billy Jensen, an investigative journalist and Paul Haynes, who worked as a researcher with McNamara, to complete the project. Together, Haynes and Jensen pulled together her unfinished book, her handwritten notes, and over 3,500 files on her computer. The result was a chilling and vivid account of the serial killer and a compelling exploration of McNamara’s obsession with the case. The book ends with McNamara’s letter to the Golden State Killer where she predicted his eventual capture.