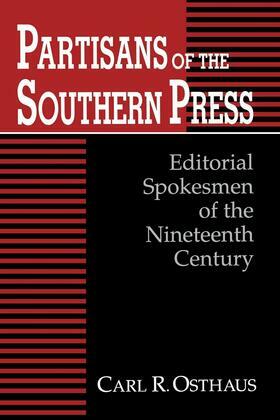 Partisans of the Southern Press

by Carl R. Osthaus (Author)
Buy for $12.95 Excerpt
Nonfiction Human science Language arts & disciplines Journalism
warning_amber
One or more licenses for this book have been acquired by your organisation details

Carl R. Osthaus examines the southern contribution to American Press history, from Thomas Ritchie's mastery of sectional politics and the New Orleans Picayune's popular voice and use of local color, to the emergence of progressive New South editors Henry Watterson, Francis Dawson, and Henry Grady, who imitated, as far as possible, the New Journalism of the 1880s. Unlike black and reform editors who spoke for minorities and the poor, the South's mainstream editors of the nineteenth century advanced the interests of the elite and helped create the myth of southern unity.

The southern press diverged from national standards in the years of sectionalism, Civil War, and Reconstruction. Addicted to editorial diatribes rather than to news gathering, these southern editors of the middle period were violent, partisan, and vindictive. They exemplified and defended freedom of the press, but the South's press was free only because southern society was closed.

This work broadens our understanding of journalism of the South, while making a valuable contribution to southern history.