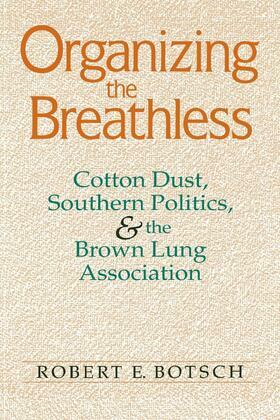 In the 1970s, textile workers joined forces with a small band of grassroots activists and organizers and challenged the most powerful industrial interest in the heart of Dixie-the cotton textile manufacturers. They located disabled workers and organized them, employing the full range of interest- group tactics, and they creatively engaged in legislative, administrative, and judicial lobbying as well as protest actions-with remarkable success.

Robert E. Botsch recounts the history of the Brown Lung Association and details the interaction of the major participants in the rise-and ultimately the failure-of the organization. A once all-powerful and politically dominant textile industry lost its public relations battle as it lost business to cheaper labor markets abroad. Medical researchers, policy makers, and regulators had difficulty communicating. State government regulations often cost workers their health and their means of support. Organizers allowed their followers to become too dependent on their ability to raise grant monies. Working-class southerners found energy and courage in the face of age and sickness but were incapable of the self-discipline necessary for successful long-term organization.

Organizing the Breathless reveals the dramatic negative impact of the Reagan years on the disabled workers and their organization and draws lessons from the experience of other interest groups. Botsch examines central issues-the value of membership incentives, the complexities of relationships with organizers, and the perennial question of the relative importance of organization versus protest. This book will interest political scientists and historians as a strong study of labor issues, interest groups, and the South.