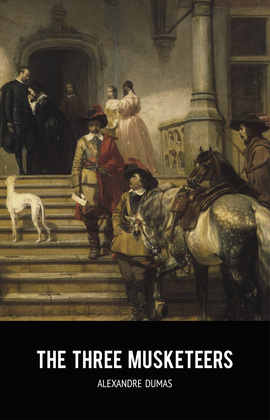 by Alexandre Dumas (Author)
Buy for $1.99 Excerpt
Fiction Classics
warning_amber
One or more licenses for this book have been acquired by your organisation details

One of the most celebrated and popular historical romances ever written, The Three Musketeers tell the story of the early adventures of the young Gascon gentleman d’Artagnan and his three friends from the regiment of the King’s Musketeers: Athos, Porthos, and Aramis.
Under the watchful eye of their patron M. de Treville, the four defend the honour of the regiment against the guards of the Cardinal Richelieu and the honor of the queen against the machinations of the Cardinal himself as the power struggles of 17th-century France are vividly played out in the background.
But their most dangerous encounter is with the Cardinal’s spy: Milady, one of literature’s most memorable female villains.

"I do not say there is no character as well-drawn in Shakespeare [as D’Artagnan]. I do say there is none that I love so wholly." —Robert Louis Stevenson
"A masterpiece which remains as fresh and living as if it were written yesterday." —Jean Lucas-Dubreton
"Dumas had genius of a certain kind — the genius that comes of vigour and a sense of the dramatic." —André Maurois