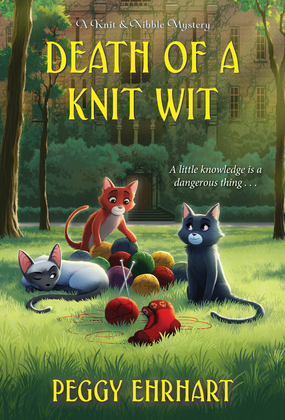 Death of a Knit Wit

by Peggy Ehrhart (Author)
Buy for $8.54 Excerpt
Fiction Mystery & detective Women sleuths
warning_amber
One or more licenses for this book have been acquired by your organisation details

When a professor is poisoned, Pamela Paterson and the members of the Knit and Nibble knitting club must take a crash course in solving his mysterious murder.

Pamela has organized a weekend-long knitting bee as part of a conference on fiber arts and crafts at Wendelstaff College. But when pompous Professor Robert Greer-Gordon Critter, the keynote speaker at the conference, crashes the bee, he seems more interested in flirting than knitting. The man’s reputation as a philanderer supersedes his academic reputation. After coffee and cookies are served, the professor suddenly collapses, seemingly poisoned—but how? Everyone had the coffee and cookies. Joined by her bestie Bettina and the Knit and Nibble ladies, Pamela sorts through everything from red socks to red herrings to unravel the means and motives of a killer dead set on teaching the professor a lesson . . .

Praise for Peggy Ehrhart and the Knit & Nibble Mysteries!

“[A] cuisine and character-driven cozy.”
—Kirkus Reviews on Knit of the Living Dead

“With an unlikely heroine and a knack for finding the 'pattern' in the murders, this is a series that will appeal to many cozy fans.”
—The Parkersburg News and Sentinel on Died in the Wool