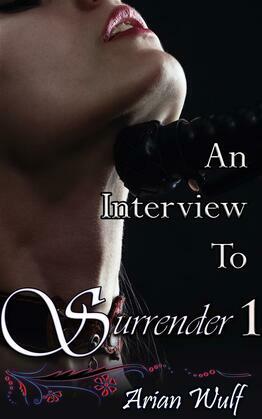 An Interview To Surrender

by Arian Wulf (Author)
Buy for €2.99 Excerpt
Fiction Erotica Romance Adult
warning_amber
One or more licenses for this book have been acquired by your organisation details

Getting kicked out of her house the moment she turns eighteen isn't the worst thing that could have happened to her.  After all, Ari has a job interview lined up. Except all the questions she's being asked are incredibly intrusive. She is stripped and touched in all the right ways and all the wrong ways, making her feel things she has never felt before and do things that makes her red with shame.

He pulls back and tips her head up until they're looking at each other. His eyes seem to be searching for something on her face and she has to struggle to keep herself from lurching away. He's so frightening up close too, his eyes more wolf than man, his teeth too sharp to be completely human. A part of her hopes that he would say no, that she was being ridiculous for asking at all and of course she didn't need to have sex with him for her to stay, but his lips part and he asks, "Would that be such a terrible thing?" he asks.

"W-what?" she stutters, embarrassed, her heart beating a hundred times a minute. It's not, really. A crazy part of her thinks she wouldn't mind it if it was him taking her virginity, but the practical part of her mind is telling her to run while she still has the chance. It's obvious that he wants her- wants all of her, and she's not sure if she should give herself to him so willingly. What if he fucks her and then throws her out into the streets? What would happen to her then?

Her panic must have shown in her face, because his expression softens.

"It's not as frightening as you seem to think it is," he reassures her, his large hand reaching up to cradle her cheek. "I won't hurt you," he says. "I take good care of what's mine," he says and she hears the bird chirping from it's cage, like it understands what they're saying and is agreeing with him.

She chews on her bottom lip, searching his face for a sign that he's lying to her and finding none. She doesn't know him well enough to be able to tell if he's lying, at any rate.

"Would you let me take your clothes off for you?"

Her bottom lip is hurting from how hard she's biting it, but the alternative is talking and she's very sure she can't form any words right now. He keeps doing this, asking something perfectly reasonable and professional, and then doing a one-eighty and asking her for something ridiculous like stripping down.

She wants to shake her head, tell him that he's being too inappropriate and should stop. Nothing about this is appropriate, really.

She's not so innocent that she doesn't know what she's feeling is arousal, but she also thinks that it's wrong to feel this way with someone she doesn't know at all, someone whose intention isn't even all that clear. She thought she was applying for a job. Now, it looks more like she's applying to be a prostitute. Or his prostitute?

The place feels too fancy to be a sex house. The front garden had a giant water fountain the shape of a dragon. Maybe it's a really, really fancy sex house.

"You- You're being very inappropriate," she says and is afraid a second later for saying anything at all, worried that he would find insult in it and be upset, but he merely bares his teeth at her in a mockery of a smile.

He looks- he looks hungry.

And she's the only thing on the menu.