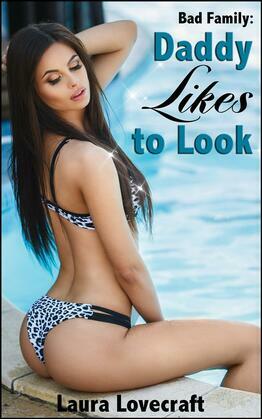 by Laura Lovecraft (Author)
Buy for €2.99 Excerpt
Fiction Romance Adult Erotica
warning_amber
One or more licenses for this book have been acquired by your organisation details

Ryan jerked awake at a touch on his arm.

"Sorry, daddy, didn't mean to scare you." Mindy stood next to his chair.

After cleaning up the scene of the crime, he'd come downstairs, made a quick sandwich, grabbed two beers, and went into the living room to watch the Sox game. He peeked out the kitchen window to see Mindy still on her stomach.

He admired her amazing body in the skimpy bikini bottom, then managed to pull himself away before she opened her eyes and saw him in the window. He'd wolfed down the sandwich, chugged a beer, and must have fallen asleep.

"Sorry I didn't let you know I was home," he lied. "I just grabbed lunch and came in here." He stifled a yawn. "Guess I was pretty tired."

"Bet you were," Mindy nodded while looking out the living room window that faced the driveway.

As he always did when Mindy wasn't looking, Ryan was. She wore one of her pink Mary Lou's Coffee t-shirts. The shop's niche was they only hired young pretty girls who were told to be all smiles and flirty, making it a popular morning stop for guys.

The t-shirt fit snugly-the girls were told to order them one size small, and a V-neck, which displayed more than a little cleavage. Mindy worked there weekday mornings during the summer and always bragged how she got the most tips.

The shirt was long enough to go below her hips, barely covering the leopard print bikini, but left the entire length of her legs bare, and he had to make an effort not to stare.

That wasn't easy considering her nipples were visible beneath the shirt, meaning she'd never put the top back on. That was a new one, Mindy was always appropriate around him, he was the one with the improper thoughts.

"What's with daddy?" He spoke more to get his eyes, and mind, off his daughter, but it was a real question. He'd been Dad' since she'd turned fourteen and became "cool.' "You want something?"

That comment cleared his still sleep slowed mind. What did she mean by that?

"We all want something," he joked. "Apparently I wanted a nap."

"Don't blame you," Mindy imitated his shrug and he was painfully aware of the way her tits bounced in her shirt. "I get sleepy after I come too."

"What did you just say?" Ryan's indignation was only partially feigned, he couldn't believe she'd just said that.

"I took a nap outside too. I love getting off, then lying there all happy and satisfied in the warm sun," she giggled. "I feel like a pretty little kitty, purring and sleepy."

"That isn't something you need to tell me," but damn, he liked hearing it. Be a father dammit, this wasn't one of his fantasies.

Mindy held her hand up and he froze when he saw she was holding his phone.

It was one of the pictures of her topless.

"More like Daddy likes to look." She kept swiping. "You even recorded me!"