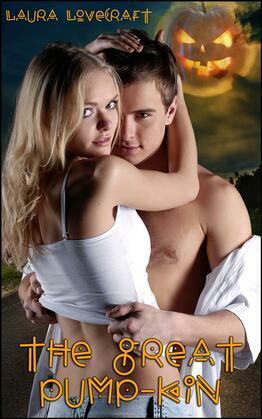 by Laura Lovecraft (Author)
Buy for €2.99 Excerpt
Fiction Erotica
warning_amber
One or more licenses for this book have been acquired by your organisation details

In 1871, John Winchester was hung for the crime of incest. To his last breath, John claimed to be under the influence of The Great Pump-Kin. Today, Zoey and her brother, Nathan, have found the Pump-Kin and by consummating their taboo love, have awakened it. Now whole, the Pump-Kin exacts its revenge. The families of the small town are about to get a lot closer on a Halloween they'll never forget!

"Love you Nathan, Love you Nathan." Her brother's words from the vision she'd been given sounded through her mind followed by "All I need is a chance to show her how much I love her. No one would treat her better than me! But I can't even tell her!"

There was a sob of frustration at the end of those words that melted her heart, and as her mind cleared, Zoey now knew she could do this, no, not could, wanted to.

She'd known of his lust, now she'd felt his love and in turn it awakened her love for him. It was all true, they were meant for each other, and not just for tonight's ritual, but the rest of their lives. A smile spread across her face and a wave of moist heat flowed between her thighs.

Zoey had her share of sex the last four years, but she'd never been this wet, nor felt the need to quench her body's lust this strongly. Her heart swelled as well, love matching lust. She was going to make her little brother happy, make his dreams come true, all of them, the dirty ones, the sweet ones, and everything in between.

Now experiencing an emotional desire that matched her physical longing, she smiled as she sauntered over to him.

"You okay?" he asked, as he remained standing on the blanket. "What was all that?"

"You have something you want to tell me, Nathan?" she asked.

"Like," she leaned close and whispered in his ear. "How much you love me?"

"No" he took a step back putting his hands up. "You got that messed up family stuff in your head."

"You sneak into my room when you knew I came home drunk and wouldn't wake up." She told him. "You pulled my sheet off and made a nasty mess in your own hand, jacking off over me."

"A little pumpkin showed me," she shrugged. "That and finding one of my thongs in your room covered in nasty stains."

She stopped him with her finger to his lips as she had before.

"I have and that's why we're here because your feelings for me were foretold a hundred and fifty years ago."

"Not crap, baby," she gently removed his glasses from his face, folding them and dropping them onto the edge of the blanket. "Destiny."

"You have such pretty eyes," she placed her hand on his sweaty cheek and realized not only had the cut in her palm healed, but there was no longer any blood anywhere on her. "Would you like to kiss me, Nate?"