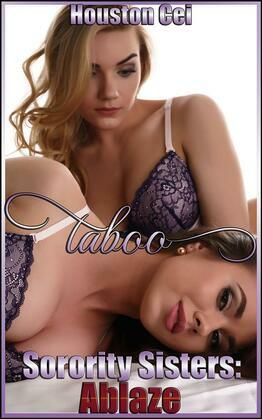 After Ruby and Jed are married, her best friend Marsha finally marries her their teacher Mr. Jason. The two couples enjoy a twisted honeymoon at the lake resort. Jean showcases the charms of Miss Camel Toes for all the sisters and guests to enjoy a Napoleon Treat. After reuniting with her husband, Ann learns the joy of threesomes and mate-swapping.

Gerry always had her way with her father about what they would do on any particular Friday night. She wanted to go out dancing but this time would look different. She slipped on her black nylons that would be held by a garter belt wrapped around her scanty panties. The garter straps holding the nylons accented her shapely thighs with curves to match. With no bra, she donned a backless, loose fitting, low cut dress that was about four inches above her knees. She gazed into the full-length mirror to admire herself. With a sensual grin, she thought, Dad holds me tenderly when we dance. Does he think what I'm thinking right now? He's gonna be surprised when I twirl in this loose, short dress. He'll see my legs, thong panties, and all the good stuff. I'll bet sparks are gonna fly when we get home.

At Gerry's request, Mr. Turner took her to the classiest restaurant and lounge in town, not to mention the most expensive. Upon being escorted to their table, Gerry's big, bouncing breasts were catching eyes as she held her head high to accent her stately walk. Her pretty green eyes sparkled brightly a they were enchanted by each other sitting across from each other at the candle lit table. Mr. Turner almost loss touch with the reality that he was out on the town with his daughter. Yes, they had been out many times but this night he saw and felt that there was something very different about her. After dining, they went to the dance floor. After a few waltzes and rapid moving pop/rock songs, Gerry was ready to showcase her twirls.  As the sexy couple continued to dance, they attracted several onlookers who circled them and clapped their hands to the music. At that point Mr. Turner and his daughter were the only dancers on the floor. They danced for another hour before heading for  home.

While driving home, Mr. Turner had difficultly keeping his eyes off of Gerry's sexy legs. While in the sitting position, her skirt was hiked to bare the few inches of skin above her black nylons. Sensing the focus of her father's eyes, she feinted a need to adjust the straps holding her nylons. The gesture made her skirt betray all of her pretty legs and also the bikini-like panties. Gentleman that he was, Mr. Turner was prepared to open the door for his daughter as they were parked in the driveway. She made a purpose of slowly moving one leg at a time to leave them spread apart long enough for her father to get a glimpse of her pretty legs and the crotch of her panties.

It was a warm August night with a full moon and a gentle breeze when Gerry took her father's hand as he was ready to open the door. She looked into his eyes and said, "Dad, we've been going out every Friday night for months now. This has been the best night ever. Don't you think it's time you should kiss your date before taking her into the house?"

"Well...uh...it's just you and me and I have never thought of these times as dates."

"Well, this time is a date and I would like a kiss," she said in a mock demanding tone. His intention was to present a gentle kiss on the lips but he quickly found that his daughter would have other plans. When their lips met, she slid her warm tender tongue in between his lips.