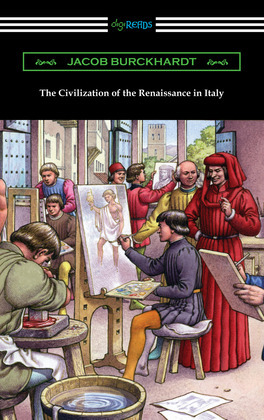 The Civilization of the Renaissance in Italy

by Jacob Burckhardt (Author)
Buy for $9.99 Excerpt
Nonfiction Arts
warning_amber
One or more licenses for this book have been acquired by your organisation details

Jacob Burckhardt was a European historian and critic of the nineteenth century who is commonly referred to as the world’s first cultural historian. He believed that historical writings should describe the spirit, forms of expression, people, and setting of a particular era. He viewed the Italian Renaissance as the world’s finest period of culture and chose it as the subject of his most well-known work, “The Civilization of the Renaissance in Italy”. At the time of its publication it was the most influential interpretation of the Italian Renaissance ever written due to its expansive look into the opulent culture and artistic movements which were created during that time. In the work, Burckhardt seeks to compare the Renaissance with other important eras in order to show how the Italians rose above those cultures. The text, however, is not so much “scientific” as it is opinionated, which has earned it a reputation for being wholly biased. Still, Burckhardt is able to weave together a masterful narrative which creates a holistic story for the Renaissance and its influence on Western Civilization. This edition follows the translation of S. G. C. Middlemore.