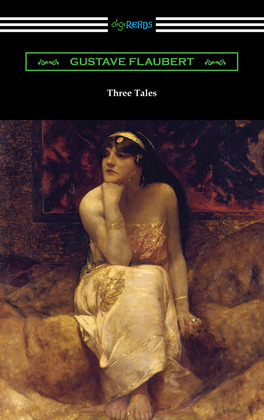 by Gustave Flaubert (Author)
Buy for $6.99 Excerpt
Fiction Short stories
warning_amber
One or more licenses for this book have been acquired by your organisation details

First published in French in 1877, “Three Tales” is a collection of three short stories by the celebrated French novelist Gustave Flaubert. Although Flaubert is most well-known for his novels, he took a hiatus near the end of his career to produce a collection of short stories. Flaubert was considered to be a master of style and obsessively devoted to finding the right words for his story telling. The first story in this collection “A Simple Soul” is a story of love and spiritual awakening seen through the simple and apparently unremarkable life of a servant girl. While she has little materially, she retains her ability to love and is devoted to others. “The Legend of Saint Julian the Hospitalier” is an Oedipus-like tale that examines fate, the consequences of violence, and the redemptive power of benevolence and generosity. “Herodias” is the retelling of the beheading of John the Baptist that focuses on the role that Herodias and her daughter, Salome, play in the betrayal and death of John. Together these three tales represent some of the best of Flaubert’s shorter works. This edition includes a biographical afterword.