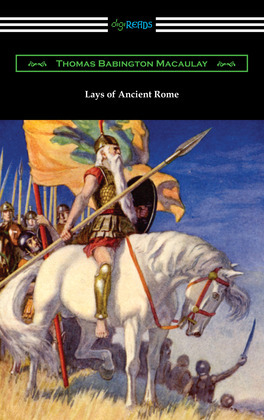 First published in 1842, “Lays of Ancient Rome” is a collection of six lays, or narrative poems, by the British historian and politician Thomas Babington Macaulay. Four of the six poems retell famous heroic episodes from early Roman history and two of the lays concern more modern, nineteenth-century events. Macaulay’s work is the result of his detailed research into Roman history and his goal to create poems that resemble those that may have been sung or spoken in ancient times. “Lays of Ancient Rome” was immensely popular upon its publication and the text became a standard book in British public schools, where countless students memorized and recited the classic poems. The most famous of the lays is “Horatius”, which recounts the heroic deeds of Publius Horatius and his two friends, who held a critical bridge against the invading Etruscan army and prevented the sacking of an undefended Rome. This stirring work was quoted by Winston Churchill, who had read the work as a schoolboy, to convince the British government to stand strong against the threat of a German invasion during World War II. The poem’s famous lines continue to appear often in television, movies, and literature. Macaulay’s timeless work is a lyrical and inspiring combination of both history and poetry that continues to educate and engage audiences of all ages.