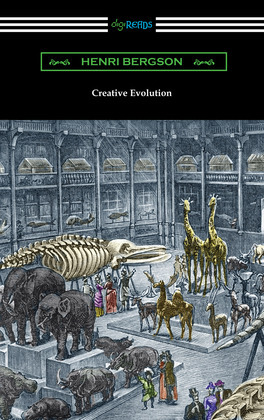 by Henri Bergson (Author)
Buy for $8.99 Excerpt
Nonfiction Science and technics Science Life sciences Evolution
warning_amber
One or more licenses for this book have been acquired by your organisation details

Henri Bergson was a French-Jewish philosopher and Nobel Prize winner in Literature, whose third major work, “Creative Evolution”, provided an alternate explanation for Darwin’s mechanism of evolution. First published in French in 1907 and translated into English in 1911, the work proposes an orthogenesis or progressive theory of evolution in which Bergson argues that organisms innately evolve towards an end goal. Bergson focuses on four key steps in evolution: that there must be a vital or creative impulse which explains the creation of all living things; that there must also be an impulse accounting for diversity and differentiation; that these tendencies can be defined as instinct and intelligence; and that intuition allows us to connect ourselves back to the original, creative, vital impulse. Bergson uses concepts of time, human intelligence and intuition to illustrate his ideas on the true goal of life. “Creative Evolution” was very popular in the first half of the twentieth century and held a significant influence on modern writers and philosophers. Bergson’s work remains relevant and thought-provoking with its profound contribution to the philosophical discussion of what may drive evolution. This edition includes a biographical afterword and follows the translation of Arthur Mitchell.