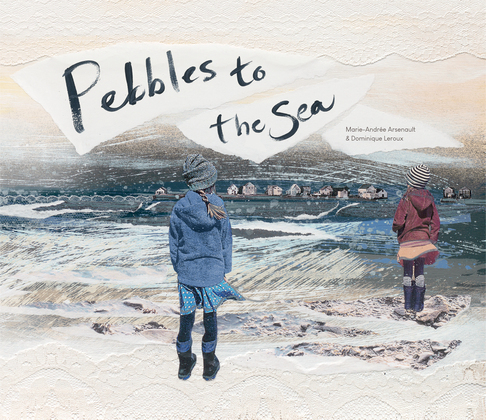 Pebbles to the Sea

Two children feel adrift between the separate worlds of their parents …

With their father at the marina, and their mother in the workshop, Flo and Fée aren’t sure where they belong. But at least they can still have fun painting the treasures that wash up on the shore.

One day they hear a noise and see a stone trace an arc across the sky — it must be from Henri’s giant slingshot! They decide to go see him, but first stop at the café, where they chat with the piano player, then visit their artist-friend in her shop. When they finally reach Henri, he lifts them up onto ladders where they can see two islands that were once connected by an ice bridge. “Have the two islands separated? Like Maman and Papa?” Flo asks. But Henri tells them there’s a sand bridge underwater that links the islands, just as the girls still link their parents. Then he, like the piano player and artist, walks away with a brush and can of paint. Where can they all be going?

With prompting and support, identify characters, settings, and major events in a story.

Retell stories, including key details, and demonstrate understanding of their central message or lesson.

Use illustrations and details in a story to describe its characters, setting, or events.